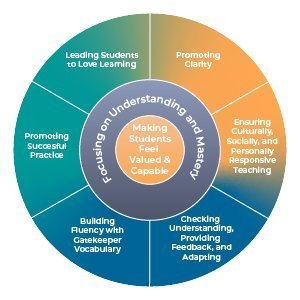 A group of six high school students from Dayton Business and Technology High School met with a researcher from the National Center for Urban School Transformation (NCUST).  The researcher asked, “How did you happen to attend this school?”

One male student quickly responded, “Most of us were kicked out of other schools.”

Another male affirmed, “Yeah. We got expelled because of stuff.” “So, how long will you attend this school?” the researcher asked.

“Oh, I’m not going back to my other school,” one girl quickly explained. “Me either!” other students offered in chorus.

“Almost all of us plan on graduating from this school,” one of the girls explained.

“Is that because you’re not allowed to return to your previous schools?” the researcher asked.

“No,” one of the boys responded while adding, “We could go back after one month, one semester, or one year, depending on what we did. But, we don’t want to go back. We want to graduate from this school.”

Before the researcher could ask why, one of the girls explained, “The teachers at this school care about us. They want us to learn.”

Another chimed in, “Yeah, they want us to graduate. They believe in us.” “But, don’t all teachers care?” inquired the researcher.

“Not at my other school. At least, they didn’t care about me” responded one of the boys.

“At this school, the teachers really want you to understand things,” one girl added.

“What do you mean?” inquired the researcher.

The girl responded, “At the other schools, the teachers just want to get done with whatever they’re supposed to do, give you an assignment, and give you a ‘D’ or ‘F’ grade. They don’t really care if you learn it or not. They just want a grade for their grade book.”

“Yeah, but here it’s different,” another student explained. “They’re always trying to break it down for us so we understand it.”

“What do you mean?” the researcher asked.

After a brief pause, the researcher asked, “So, do you feel you work harder here than you worked at your previous schools?”

In unison, the students nodded affirmatively. Then, the researcher asked, “Why do you work harder at this school?”

One of the boys answered, “Why do we work so hard? Well, you know that most of us kids went to other schools around here, and we were kicked out or suspended or other stuff happened.” Then gesturing with his arms crossed, as if imitating his former teachers, he continued, “At my other school the teachers would see me coming and think ‘Here comes trouble. Here comes a headache. Here comes my next suspension. Here comes a dropout.’ They saw me as another Black statistic. Even though I knew I wasn’t stupid, I pretty much figured they were right. I was never good at school. I had a hard time reading the textbooks. I just didn’t see how I was going to get anywhere at school or in life.”

He continued to explain, “So, when I came here, I thought it would be all about hanging with my friends. But, when I got here, the teachers saw me differently.” Then gesturing with his arms wide open, he continued, “They looked at me like ‘Here comes potential. Here comes a future graduate. Here comes a future college student.’ That’s the way they treated me. That’s the way they talk to all of us. So, when you’re treated that way, it just makes everything different. You want to work hard because you want them [the adults] to be right about you.  You don’t want them to change their minds.”

Dayton Business and Technology High School is a charter school in Dayton, Ohio. The school won the America’s Best Urban School Award in 2013.

On the Minds of Educators Striving to Produce Equity and Excellence:

How can I get each and every one of my students to believe,
“My teacher sincerely wants me to succeed in life and my teacher is confident that I can succeed”? 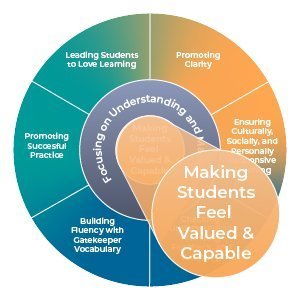 Scheurich (1998) studied schools that generated strong academic results for children of color and children from low-income families. He determined that educators in those schools established caring, loving, and respectful environments in which students were expected to achieve at high levels. Similarly, in every high-performing school we studied, students (including students at the Dayton Business Technology High School referenced above) emphasized that their teachers cared sincerely about them and their academic success. We believe that almost all teachers care about their students; however, students in high- performing urban schools are much more likely to perceive that their teachers care about them and value them. The perception of caring, or lack thereof, influences student motivation and behavior.

After visiting 150 high-performing urban schools where all demographic groups of students excelled, we are convinced that teachers in these schools lead students to feel valued, respected, and capable. In more typical schools, the same students are often left to feel alienated, unwanted, and unlikely to succeed. Teachers in high-performing urban schools convince Black, Latino, and Native American students, students from low-income or immigrant families, students with emerging bilingualism, LGBTQ students, students experiencing homelessness, students in foster care, students with disabilities, and many other students that the adults in the school value and respect them. Somehow, students (including students who are commonly not served well in urban communities) become convinced that their teachers are committed to helping them succeed in school and in life.

Throughout this chapter, we use the term “caring” extensively. We note, however, that Noddings (1984) and Valenzuela (1999) described “aesthetic caring” that occurs in ineffective schools where educators demonstrate “care” when students conform to educators’ expectations. The veneer of aesthetic caring wears thin quickly in environments where students are accustomed to the frustrations and disappointments associated with poverty, violence, and racism. In contrast, Noddings and Valenzuela explained that, through authentic caring, educators nurture and value relationships with all students. In this second edition, we have endeavored to distinguish the authentic caring we observed in the high-performing schools we studied. We have attempted to explain what authentic caring looks like and why this type of caring is difficult to develop and sustain.